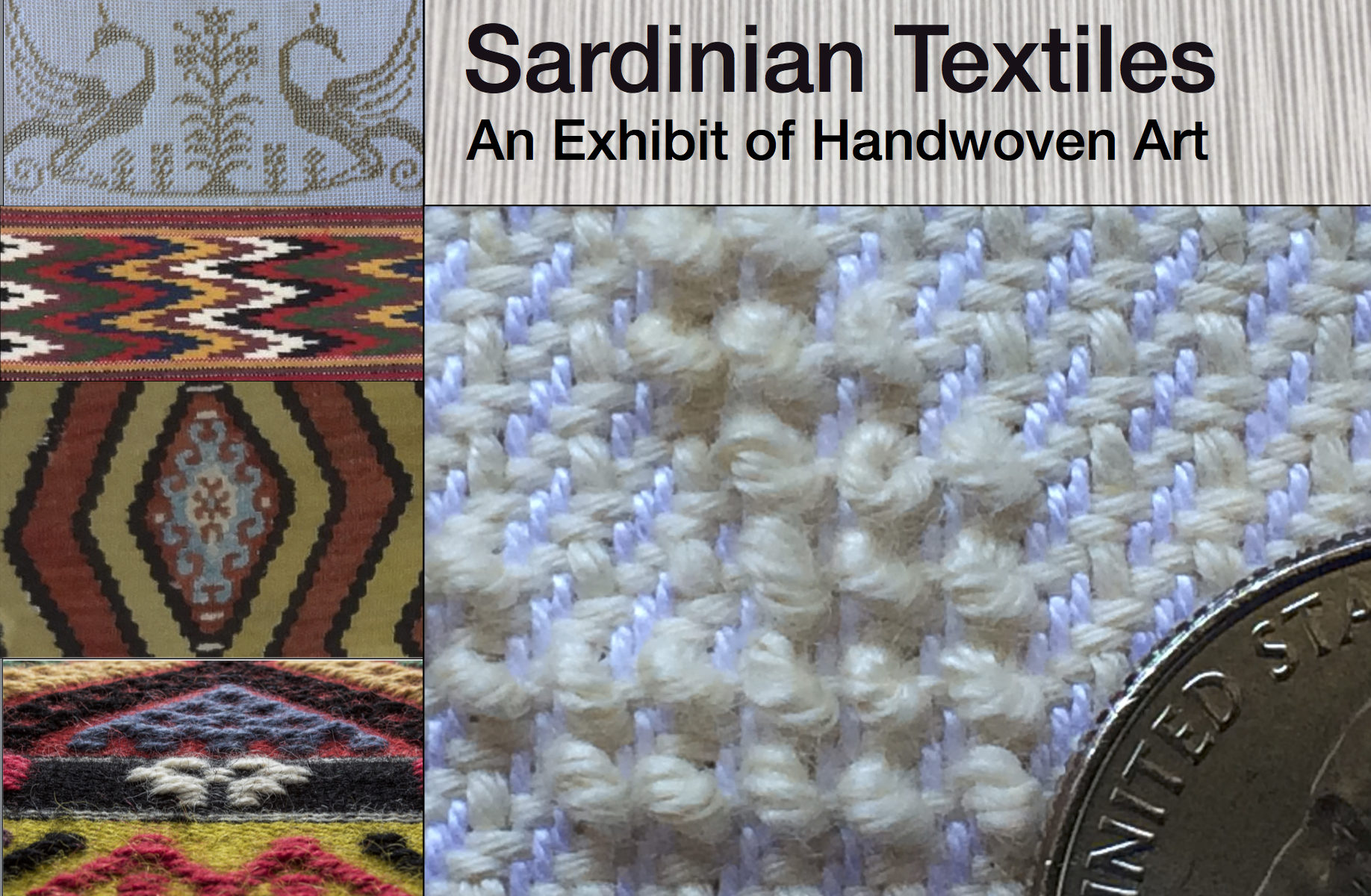 We would like to thank you for your participation in Sardinian Textiles: An Exhibit of Handwoven Art and related events.

The show and related events were well-received and brought much attention to Sardinia and Sardinian textiles.

There were about 120 guests at the opening night of the show, arriving from many cities across California and even other states. Paolo Barlera, Director of the Italian Cultural Institute – San Francisco, and Luigi Biondi, the Assistant Consul General, welcomed the crowd and introduced two representatives from the Comune of Samugheo, Deputy Mayor Maurizio Frongia and Cultural Minister Manuela Barra.

Maurizio thanked organizers, presented them with a book of Samugheo’s history and a bar of the local handmade Gaia soap, and talked about the history and importance of weaving in Samugheo. This was followed by the trailer from the film I Want to Weave the Weft of Time, demonstrating the importance of Samugheo’s last handweavers, and a slideshow and discussion of handweaving. After this, there was a short lecture about the show participants, the challenges weavers, shops, and mills face, and a presentation of high-resolution photos of key historic weavings from the MURATS collection.

The audience was captivated by the weavings, and very interactive. People asked many questions during and after the presentation and inspected the textiles on display. The crowd was also happy to be well-fed: San Giuliano of Alghero donated many cases of olive spreads and antipasti, all of which were eagerly devoured along with the kilo of pane carasau direct from Sardinia, sheep cheese, and, of course, wine. Local restaurant 54 Mint also provided Italian desserts, which disappeared rapidly.

In the weeks after the opening there were two film screenings of I Want to Weave the Weft of Time. The first screening was held in lieu of the planned pibiones workshop, as at the last minute the weavers were prevented from traveling by an unforeseen event. Lacis Museum in Berkeley hosted the event. The second screening was at IIC some weeks into the show, to bring a new audience to the exhibit.

A number of newspapers, websites, and social networking platforms carried short notices and articles about the event, and longer articles appeared in L’Italiano-Americano in the US and a number of papers in Sardinia.

We would also like to thank the volunteers in San Francisco who helped make the event a success. Photographer Flavia Loreto took wonderful photos capturing the opening night (attached). Volunteers Arpana Warren, Mark Springer, Gab Koza, Anne Yale, and the staff of the IIC helped set up the show and opening night. Vera Lazarevic and Gilles Boccon hosted a wonderful dinner (at which Gilles prepared everything from scratch) where Silvio discussed his work and latest collection. Dhanya Olson created the looms for the intercultural project.

In addition demonstrating the interest the public has for Sardinian textiles and Sardinia, the show increased the public’s understanding of the importance of maintaining the traditions, history, and designs of Sardinia, and their support of efforts to ensure the creation of hand-woven, hand-decorated, and mill-produced textiles remains in Sardinia.

As you know, the IIC-Chicago is interested in hosting a similar show in the future; I’m (Kelly) following up with the director to ascertain details of this future project. I’m also developing concrete opportunities to promote Sardinian textiles in a sustainable manner that brings visibility and sales to Sardinia by leveraging the the latest advertising technology.

While the show and the related events are over, the success has opened a doorway that I see as the beginning, an introduction of Sardinian textiles to the United States!

Thank you all for your participation!

Thank you to Flavia Loreto for the photos!