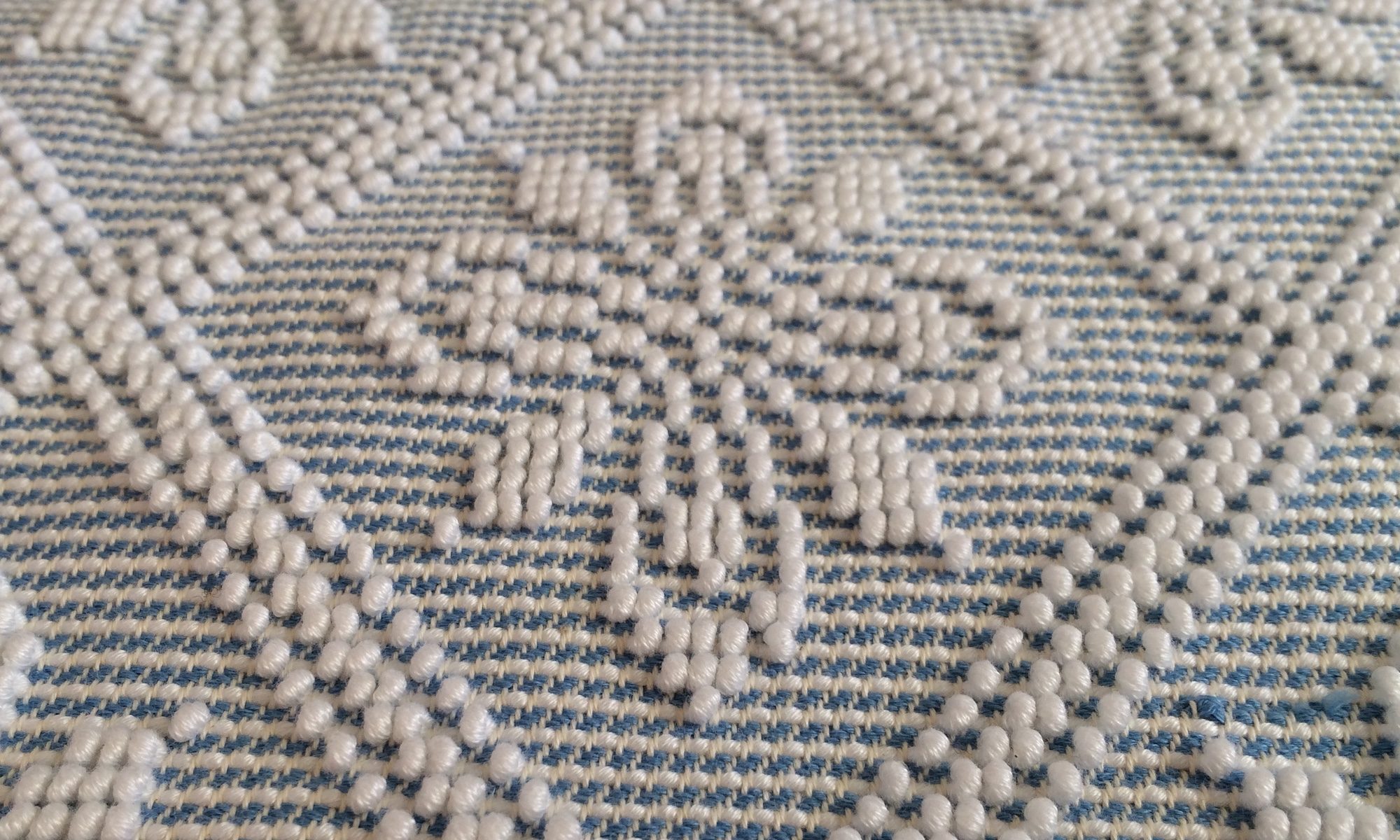 Weaving is an ancient and revered art in Sardinia, and in Samugheo, Sardinia’s weaving capital, Isa Frongia’s studio is the oldest and most respected — and the only professional studio still working entirely by hand.

Isa, along with her mother Susanna and cousin Anna Maria, use traditional methods, looms, and patterns to create museum-quality textiles that epitomize the best-known Sardinian weaving tradition, that of using pibiones, or small raised bumps of thread, to create beautiful patterns. Their textiles set the gold standard for this little-known art.

Their work has been featured in magazines, newspapers, and documentaries around the world, as well as showcased in the homes of famous clients. They have won awards and competitions. Collectors from Europe, the United States, and the Middle East commission weavings, valuing the Frongia’s skill and commitment to producing the highest quality, especially as the art of and appreciation for fine handweaving are being lost.

When Susanna built a weaving studio open to the public in 1960, her move was considered bold – especially for a woman. Women traditionally wove in their homes, and passed their craft from generation to generation within a family and village. Families were self-sufficient, and every household had a loom on which the women made clothing, tablecloths, napkins, bedspreads, curtains, and other household goods. Items were made with care and consciousness, and often used and gifted at ceremonies marking life events, such as weddings, comings-of-age, and funerals. Handwoven items were treasures used, worn, and valued for carrying symbolic meaning, love, and respect of the recipient and the weaver.

In the 1960’s, power looms and textile mills arrived in Samugheo, and the art of weaving started to decline. Susanna opened the studio as the practical means to support a family and preserve an art: weaving is what she did, and what she and Isa still do. Weaving is their life.

The attitude, skill, and way of life of Isa, Susanna, and Anna Maria are rare today: The number of artists, especially those working in traditional methods, has diminished, and their work is rarely found outside the island. Other handweavers in Sardinia live in other areas and continue other traditions, designs, and patterns, rarely if ever creating textiles using the pibiones technique.

Most weavers working in Samugheo’s studios today use hydraulic powerlooms, stopping the powerloom at intervals to perform a small amount of hand decoration before pressing a button to once again engage the automation. These hand-decorated textiles are often marketed with the fallacious label of handmade.

Large mills produce thousands of computer-designed textiles in a single run of an automated loom, providing Sardinian households and the tourist industry with useful, low-cost replicas of traditional Sardinian art.

Isa, Susanna, and Anna Maria weave entirely by hand, in the same studio Suzanna founded more than 50 years ago. They work using the time-honored methods of generations of Sardinian handweavers, producing textiles that display supreme technical skill and bear the essence of their tradition, their culture, and their dedication to the art of fine Sardinian handweaving.

While Isa says the studio is always open to visitors, you can contact Isa directly to make a reservation or ask questions.

See these pages on this website for more info:

Isa Frongia, in her words and contact info (English)

The Art of Handweaving, Samugheo

See the beautiful film I Want to Weave the Weft of Time (Tessere le Trame del Tempo) to see the women in action! This 29-minute documentary features Isa, Susanna, and Maria and explains the art of the tessitori artigianali and the importance of what the weavers bring to the world. You can also watch the trailer here.